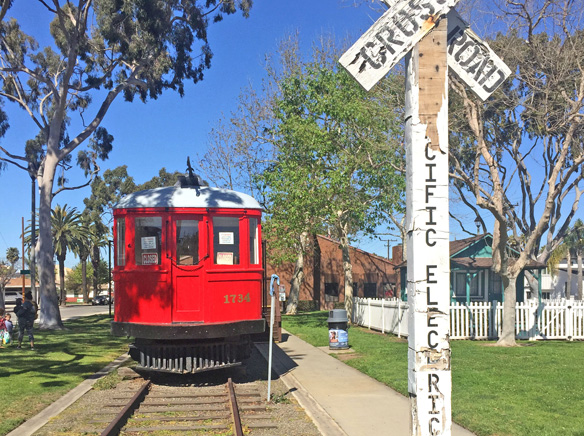 The Historical Society has faced fiscal challenges in recent years, relying on an antiquated business model that failed to raise revenues sufficient to sustain its operations.   As a result, much of the car’s exterior had dramatically deteriorated in recent years.

Late last year, the city government offered the Historical Society $10,000 for the Red Car, but the society — which has been at odds with the city for many years — refused that offer and accepted a far lesser one from the Lions Club.  .

Scott Weir, first vice president of the Lions, wrote that the club paid $1,501 for the empty Red Car, the tracks, the deteriorated railroad crossing sign and some separate non-historical items. He cited the canvas bonnet as an example.  The contents were not included.  But as previously reported by The Sun, the Historical Society had already removed the contents from the local museum.

For almost ten years the Historical Society and Red Car Museum, a non-profit, has been run by members of the Antos family.  Charles Antos was a long-time city employee and former Seal Beach city councilmember.   Marie was the Society President for many years and more recently her granddaughter has been the group’s director.

Disagreements with long-time members rose to the surface many years ago and turf wars developed between the Society and the Seal Beach Founders Day Committee.  The Society made use and research of their materials difficult, a fact which puzzled and thwarted many local historians.

Long-time members, including lifetime members, say they were no longer notified about meetings and thus were unable to vote at elections.   Members who had participated in the recording and transcribing of oral histories were informed they had no right to access those materials.  Local restaurants were informed they had no right to display old photos of Seal Beach on their walls since the Society had the sole ownership for the use of the photos.

The latter was absolutely untrue since most of the old photos of the city’s 1905-1920 amusement days were 1) distributed as marketing postcards across the country and were thus in the public domain, and 2) the original negatives (by photographer Edward Cochem) were given by his family to UC Irvine.  The Seal Beach Society had absolutely no claim to ownership.

During the city’s centennial in 2015, the Society ultimately declined to work with the rest of the city’s bicentennial committee and would not make its many materials available for research or inclusion in publications.

In November, the city government offered to buy the Red Car for $10,000 and warned that if proposed changes to the non-profit’s organization were not made, the city would terminate its lease with the Historical Society.  The Historical Society responded by asking city officials to consider the Red Car issues after the holidays and after COVID-19 restrictions were relaxed.

Since then, the Historical Society was not reorganized and the city has canceled the lease.

The turf war has gotten much attention in The Sun Newspaper and most recently in the OC Register, in an article written by Seal Beach resident Susan Goulding.