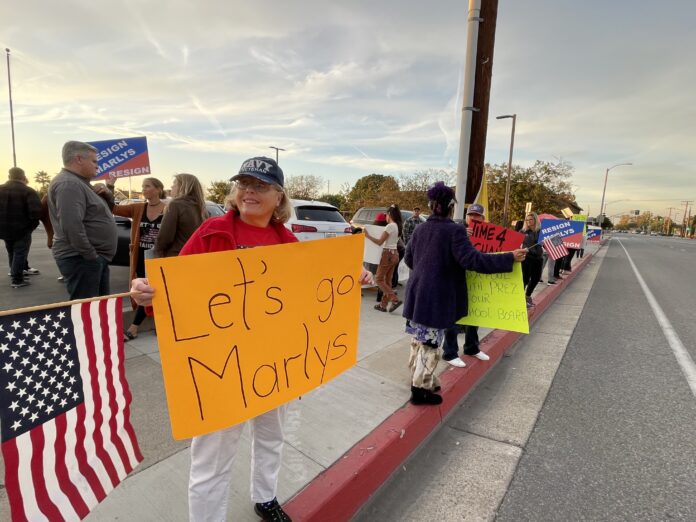 Calls for resignation, forgiveness after LAUSD Board President curses parent

By David N. Young & Jeannette Andruss –  More than a hundred protesters lined the sidewalk outside the board meeting room of the Los Alamitos Unified School District on Monday seeking the resignation of President Marlys Davidson after a video surfaced of her cursing under her breath on hot mic after a parent addressed the board.  The parent, Lauren Roupoli, was speaking against California’s planned Covid-19 student vaccine mandate and criticizing trustee Scott Fayette’s earlier remarks at the Oct. 26 board meeting when her … [more]

St. Isidore Catholic Church in Los Alamitos is set to become an American landmark after the state’s Historical Resources Commission voted Friday to nominate the historical property, and 12 others, to be given “federal historic designation.”  The Commission’s press release noted “the property is associated with the early development of Los Alamitos as an agricultural community, specifically the Mexican immigrants who worked…”  [more]

After decades, Rossmoor finally gets a street sweeping fix

After decades of complaints about parking and street sweeping problems, the Rossmoor Community Services District will likely get relief.  The District approved a small increase in their public works budget at a special meeting this week to facilitate an agreement announced by 2nd district supervisor Katrina Foley.  Foley’s office released a statement in collaboration with Joe Mendoza, General Manager of the RCSD, “in response to the unanimous support by the Orange County Board of Supervisors to address the issue of total street parking closures during street sweeping in the unincorporated community of … ” [more]

Access to a Covid-19 vaccine for 5-to-11-year-olds could be just days away, pending the decision from an advisory panel to the Centers for Disease Control and Prevention that is meeting this week to review the safety and efficacy of the lower-dose pediatric version of Pfizer/BioNTech’s Covid-19 vaccine.  While some parents are eagerly awaiting the opportunity to inoculate their elementary school-age kids, other parents want to make sure they can opt-out of the shot and still send their kids to school.   These parents are asking the Los Alamitos Unified School District Board of Education to publicly join their effort opposing a vaccine mandate. [more]