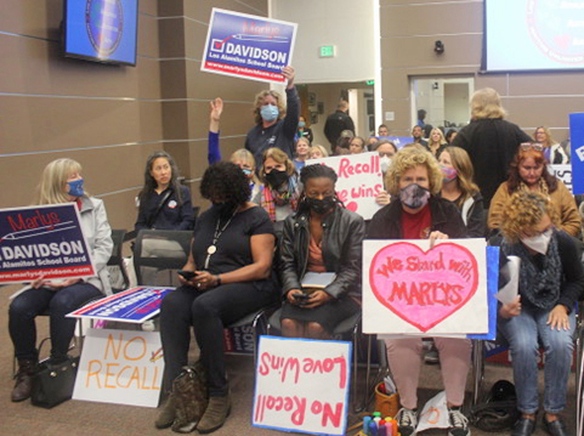 Sad news to report from Seal Beach this week as former Mayor, long-time resident  and full-time city booster Victor Grgas passed away.  Grgas was a calm presence as mayor during a contentious period in the late 1980s and early 1990s, and also a loyal and passionate booster at Los Al Griffin basketball and volleyball games.

A celebration of life will be held at noon, Jan. 15, 2022, for longtime Seal Beach resident and former mayor Victor S. Grgas Jr. The event will take place in Eisenhower Park on the south side of the pier.  Grgas passed away Tuesday, Nov. 9, after a long battle with lung cancer. He was a nonsmoker.  “He was a real go-getter; never stopped fighting,” said son Steven Grgas.   Victor Grgas turned 70 in September, said Jeff Grgas. …[more]

A divided crowd packed into the Los Alamitos Unified School District Board of Education Meeting Room last Tuesday evening.  When Board President Marlys Davidson entered the room, the audience erupted. “Resign!” shouted some people. “We love Marlys!” yelled others. Many got out of their seats, waved their signs and raised their voices creating a raucous start to the night.   The mood mellowed after … [more]

Seal Beach residents honored those who served on Thursday morning, Nov. 11, as residents and veterans gathered at Eisenhower Park to commemorate and celebrate Veterans Day.  The ceremony was preceded by the Southeast County Young Marines, based in Seal Beach. They performed the Presentation of the Colors to open the Veterans day celebration.  Rep. Michelle Steel, the Congresswoman for  the 48th  District, opened her speech with a story about how important the military service is to her.  … [more]

You never know what will happen when you introduce yourself to a stranger. For Meri Gyetvay and Old Town resident Sharon Gibson, it was a gift: mother and daughter, separated after Meri’s birth, had found each other.  They’ve known each other about six months now, according to Meri.  They usually see each other once a week, according to Meri.   Meri’s niece had a DNA test done through ancestry.com. This led to… [more]

Letters to the Editor – on redistricting and Marlys Davidson…

Santa is coming to Shops at Rossmoor Holiday Spectacular