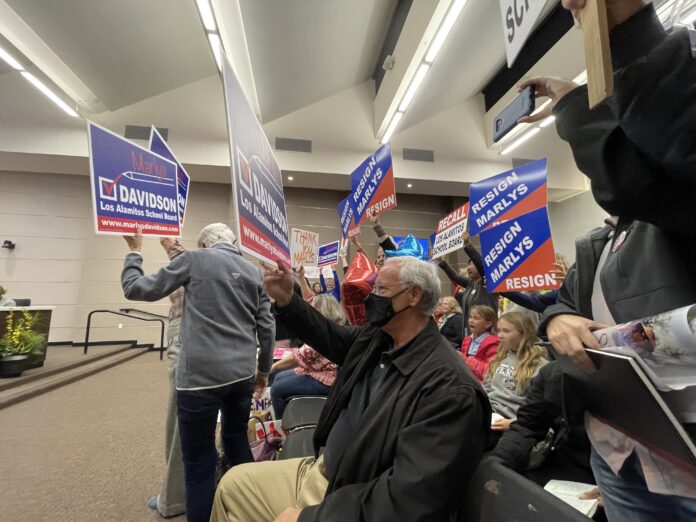 A divided crowd packed into the Los Alamitos Unified School District Board of Education Meeting Room last Tuesday evening.  When Board President Marlys Davidson entered the room, the audience erupted. “Resign!” shouted some people. “We love Marlys!” yelled others. Many got out of their seats, waved their signs and raised their voices creating a raucous start to the night.  [more]

Veterans, residents and businesspeople filled the American Legion Post 716 Friday evening as the Event News Enterprise held a star-spangled event to honor veterans and to all who serve the community.  “We are here to honor not only those who serve our country,” said State Sen. Thomas Umberg, but “all who serve our communities as well.”   Umberg spoke about the dedication of those who served and … [more]

Without a doubt, the legacy of Dr. Gregg Stone will long linger throughout the halls, classrooms, and fields of play at Los Alamitos High School.  Even at a high school with a storied history of tradition and accomplishment, Stone’s story strongly resonates in the chaotic discussions of the modern day. After 21 years of standout administration, becoming the only principal to retire twice, Dr. Stone is back, this time … [more]

Lingering issues, an increase in thefts and two recent incidents within the unincorporated area of Rossmoor apparently prompted a discussion of their security, including questioning exactly how many patrols they are getting from local law enforcement agencies.
During a lengthy discussion during their November meeting, directors openly questioned the actual patrol metrics of… [more]