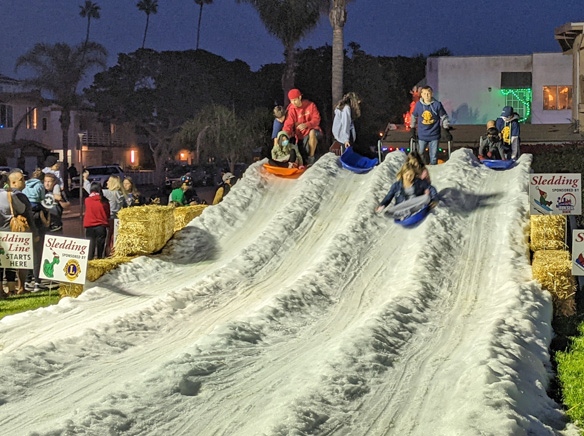 The 43rd annual Seal Beach Christmas Parade will usher in the holidays on Friday, Dec. 3 at 7 p.m.   More than 80 entries and more than 2,200 participants will march down Main Street from Ocean to Pacific Coast Highway to kick off the season.   This year’s theme is “Surf’s Up for  Christmas” and is a tribute to Seal Beach surfing legend Rich Harbour. The parade’s presenting sponsor, Fresh Cut Creative, has an amazing entry planned that is … [more]

The Christmas (and other) holiday season began this weekend with the annual Christmas Tree lighting on Saturday and the Menorah Lighting on Sunday. The event officially began at 4 p.m.  As adults and children waited for darkness to fall—awful hard to appreciate Christmas tree lights in the daylight—people posed with a snowman and children rode sleds down a “snow” slope.  Hot chocolate and other foods were on sale (what, no mistletoe?) as the crowd gathered for the tree lighting ceremony.  [more]

The crowd attending the annual Seal Beach pre-Chanukah Menorah lighting on Sunday, Nov. 21, in Eisenhower Park, overflowed the section of the park north of the pier, with some guests standing on the sidewalk. The lighting of the 9-foot Menorah featured donuts, music, the rabbi/host danced during one song, and clapping throughout the program. The ceremony marked the start of the Chanukah season, the Jewish festival of lights, which officially begins… [more]

The Los Alamitos High boys basketball team reached the championship game of the Jim Harris Classic Tournament before falling to Mira Costa, 53-45 in the finals on Saturday at Ocean View High. Kaden Kent led the Griffins with 12 points, and along with KJ Carr was named to the all-tournament team.  The Griffins (3-1) reached the final with a [more]