Dave’s Hot Chicken, a fast-growing, SoCal-based chain renown for its mild to mouth-numbing, heat-level chicken, opened this past Friday in Seal Beach.

The eatery is located in the Old Ranch Towne Center, in the same building as Blaze Pizza which is also owned by Raj Rajalingam, a Rossmoor resident with many years experience in the franchise restaurant field.  Blaze Pizza opened the week before, and the week before that The Habit, the third of the three new restaurants in the center, opened its doors.   .

Dave’s, which has a large fan following, specializes in chicken tenders and sliders, with a sliding scale of seven “heat” options, ranging from “No Spice” to “Reaper” — the over-the-top level that requires a signed waiver, for those who dare.

Ice cream milkshakes also are on the menu, along with such sides as house-made kale slaw, mac n’ cheese and crinkle-cut fries.

The fast-casual chain began in 2017 as a Hollywood parking lot, pop-up by best friends Dave Kopushyan, Arman Oganesyan, and Tommy and Gary Rubenyan.  Dave had trained as a chef at Bouchon, a restaurant owned by by Thomas Keller of Napa’s French Laundry fame, and with his friends set out to create the perfect Hot Chicken by searching, tasting, and frying. 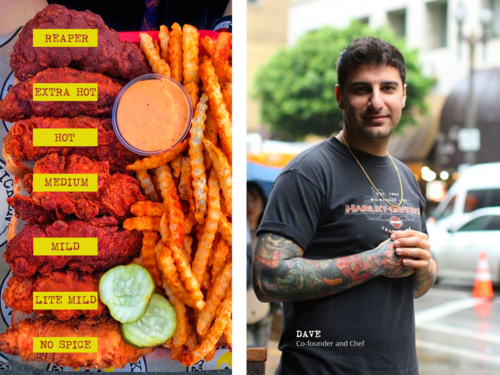 Equipped with a portable fryer and picnic tables, the four put a tiny stand in an East Hollywood parking lot, and quickly became known for their chicken offerings, sourced and prepared to be the juiciest and most tender imaginable with each piece topped with Dave’s own mix of spices ranging from No Spice to “The Reaper.”